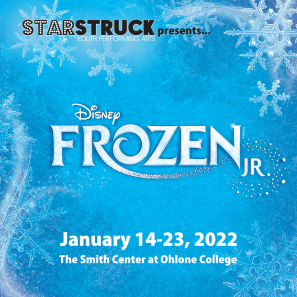 This winter StarStruck Theatre is LIVE ONSTAGE with Disney’s Frozen Jr! Courtney is proud co-director and choreographer to this heartwarming, funny, and energetic show. It’s great to be back!

In a span of just 8 weeks Courtney directed 4 different casts of The Lion King Kids at StarStruck Theatre. Check out our custom masks! 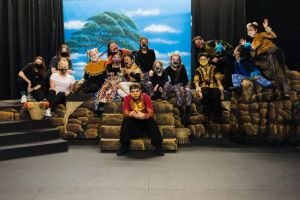 Courtney has spent the better part of the pandemic at her computer singing, dancing, and acting up a storm with the amazing students of StarStruck Theatre. We have been able to pivot our programming to be completely online. Courtney mastered the art of editing videos in Final Cut Pro, helping students adjust their sound settings on zoom, and was able to hire a lot of Broadway stars in New York City to join the StarStruck online teaching staff including Megan McGinnis, Kristin, Stokes, Jane Bruce, James Monroe Iglehart, Anthony Chatmon, Camden Gonalez, and more.

Courtney will be starring in 9 to 5, the Musical as Doralee at the beautiful Lesher Center for the Arts in downtown Walnut Creek, CA.

Summer performance camps at StarStruck Theatre have finally completed! This month, Courtney directed thirty-five 7 to 11 year olds in Aladdin Kids. Now for a nice vacation before the Fall semester begins!

Summer is in full swing! This month Courtney is finishing up co-directing and choreographing The Lion King, Jr.– a summer performance camp for ages 9-14 at StarStruck Theatre in Fremont, CA. This is one of the best groups of kids she has ever worked with.

Courtney had such a great time collaborating with old friends for TheatreWorks’ Super Hero Gala!

Courtney is returning to TheatreWorks! You can catch her and the beautiful cast of The Bridges of Madison County 8 times a week at the Mountain View Center for the Performing Arts. 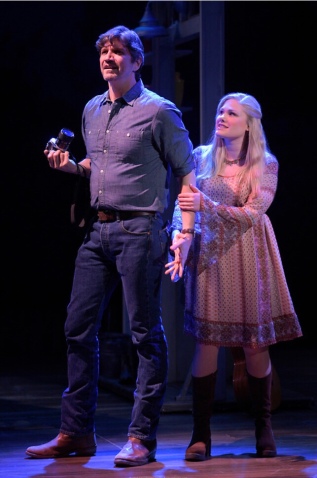 Courtney got married to the love of her life, Andretti Duvenhage in the beautiful Pleasanton, CA.

Fall is here! Courtney is happy to be continuing to work at StarStruck Theatre- teaching Zumba Kids and helping direct the main stage production, James and the Giant Peach!

Courtney is temporarily out to sea as a last minute replacement on the Emerald Princess…never a dull moment!

Courtney is thrilled to be back in her hometown working at StarStruck Theatre! She is keeping busy directing and choreographing various musical theatre camps and classes, as well as assistant directing this summer’s main stage production, Footloose!

Courtney is out to sea on the Coral Princess cruising Alaska for the summer and the Panama Canal for the winter!

Hello, Santa Clarita! Courtney is back at the Princess Cruises rehearsal studio creating yet another new show for the company. Encore! will feature Courtney in a 4-foot wide ball gown singing opera!

Courtney and the original cast of Magic to Do  have been back on land for a few months, but the documentary about their long journey to opening night has finally arrived! You may catch a familiar face at her actual NYC audition around the 4 minute mark…

Courtney is ECSTATIC to be recording her first-ever original cast album at Firehouse Recording Studio in Pasadena, California for Magic to Do!

Magic to Do is finally open and playing to overflowing houses on the Crown Princess as we sail the Mexican Riviera!

– What a month! Courtney was overjoyed to return to Tokyo for Disney On Classic‘s first-ever Spring Gala, then was in NYC for just one week before flying to Los Angeles, California to begin rehearsals for the Crown Princess.

– Courtney is currently in rehearsals for Disney On Classic in NYC before flying to Japan on May  22!

– WHAT A MONTH! Courtney has received contracts for the first ever Disney On Classic Spring Gala in Tokyo, Japan, negotiated her own contract to perform as a lead singer aboard the Crown Princess to originate a role in Magic to Do, and signed with the Daniel Hoff Agency. She also had a blast taking weekly classes at The Growing Studio and Step it Up classes with New York Casting and Music Directors. PHEW!

-This fall and winter you can catch Courtney in Dancing in the Street with the Prima Donnettes nine times a week at Florida Studio Theatre. Read about the cast and creatives here!

Jannie Jones and Courtney in Dancing in the Street

– Courtney was honored to return to California for TheatreWorks Honors: Andrew Lippa. She had a blast singing Andrew’s music including “Pulled”, “Live Out Loud”, “More is More is More” (alongside Broadway’s Tory Ross), and much more!

– Courtney is back in rehearsal with Carolee Carmello and new cast member Jay Armstrong Johnson for another reading of The Stardust Supper Club!

– Courtney will be performing along side Carolee Carmello, Jason Graae, Julia Murney and Charles MacEachern in a reading of The Stardust Supper Club at The York Theatre in New York City. 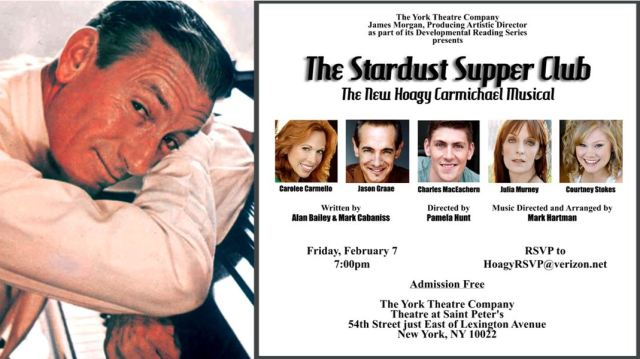 – WATCH OUT JAPAN!!! Courtney is going to leave the country for the first time EVER to tour Japan with the Tokyo Philharmonic Orchestra in Disney On Classic! She will be sporting a beautiful ball gown and singing some of her favorite Disney songs including “Part of Your World” from The Little Mermaid.

– Courtney is returning to the midwest! This time she will be belting her heart out at Kansas City Starlight playing Rusty in Footloose! This is a quick one-week-only engagement, so get your tickets now!!

– After months of auditioning like a madwoman, Courtney has TWO exciting announcements! Stay tuned…

– Courtney has begun taking Craig Carnelia’s Musical Theatre class along with some of New York’s finest.

– The fabulous Jordan Aragon has moved to NYC to live with Courtney and the equally fabulous Juliane! A happy home, indeed!

– Courtney will be making her directorial debut with StarStruck Theatre’s production of Dear Edwina! To learn more about the performance camp in Fremont, CA, click HERE!

– 6/22-7/15: Courtney is ecstatic to move to Avenue Q this summer! She will be mastering her puppetry skills as Kate Monster and Lucy the Slut in Mason Street Warehouse’s production.

– May 12: Courtney will be singing at TW Honors– an evening honoring the work of composer Paul Gordon and Chairman of Silicon Valley Bank, Ken Wilcox.

– 3/29-3/30: Courtney is returning to Overturn Theatre Ensemble to play Claire in a reading of Kathryn Hathaway and Sarah Hammond’s newest musical THE ROMANCERS. You can reserve your free ticket HERE! Meet the creative team HERE!

– The Hunger Games trilogy is everything Courtney had hoped and more. She will be attending the midnight showing of the first film!

– This month Courtney enjoyed reuniting with Adam Gwon to do a reading of the new musical String, with book by Sarah Hammond.

– Courtney had a blast helping out with Merrily We Roll Along at City Center Encores!

– Hold on! Courtney will be returning to the Bay Area for the holiday season as Martha in The Secret Garden at TheatreWorks!

Courtney as Martha in The Secret Garden

– Courtney is thrilled to join the cast of Adam Gwon’s new musical Bernice Bobs Her Hair for the NAMT festival on October 27th and 28th! Read about the star-studded cast here!

-Courtney is returning to California August 7-21 to portray Lily in The Giver as part of TheatreWorks’ New Works Festival!

– Two friends and fellow UC Irvine alums, Katherine Brady and Perry Young, have booked leading roles in the next National Tour of In the Heights! Rock it out, UCI!!!!!!

– Courtney is now represented by The Krasny Office! Please contact Gary or Chris for all performance related inquires.

– Courtney is enjoying her time settling in and auditioning in NYC. She even has even found a “real person” job (with a flexible schedule) and her own apartment. Now to find some furniture…

-June 11: COURTNEY GRADUATES FROM UC IRVINE with her BFA in MUSICAL THEATRE!!!!!!

-June 27: On her first full day as a New York City resident, Courtney and her friends won front row tickets to Priscilla Queen of the Desert on Broadway. She was chosen to dance on stage at the top of act two… Broadway debut within 24 hours of landing: check!

– May 1st: Courtney will be returning to SCR to portray Monica in Cloudlands– a new musical by Octavio Solis and Adam Gwon

-May 4th: Courtney is trilled to perform in a concert of Adam Gwon’s work at Show at the Barre in Hollywood.

– This month Courtney was honored to sing “Hold On” from The Secret Garden at TheatreWorks’ 2011/12 season announcement.

– Courtney has flown to San Francisco to play the leading role of Cat in R.C. Stabb’s new rockin’ musical Zombie Wedding. Courtney and the cast also made a cast recording!

-Original Into the Woods cast member Joanna Gleason was kind enough to stop by UC Irvine’s Into the Woods rehearsal! Read what Mrs. Gleason and Courtney had to say about the experience here.

– Courtney will participate in a master class with Megan Mullally on Friday, October 8, 2010 at the Orange County Performing Arts Center! This class/performance is open to the public. Click here for more info!

-UCI’s BFA Musical Theatre class of 2011 will have their New York showcase on March 21, 2011 at the Laurie Beechman Theatre. Agents and casting directors will be attending the first two performances of the day, and family and friends are asked to attend the third performance of the day . Please contact Courtney as soon as possible if you would like to attend.

-Courtney will be performing in Heart and Music II: Hear my Song on September 10th and 11th at 7:30 pm. All proceeds go to StarStruck Theatre’s College Scholarship. Visit www.starstrucktheatre.org for more info!

-UC Irvine has released a sneak peak at our first “rehearsal” for Into the Woods! Check it out:

– Divas for Life wasa huge success.Videos of the evening’s performances are available on youtube.com

– Courtney has just received word that she will be performing with Teal Wicks in UC Irvine’s 2010 Medal Dinner on October 2, 2010.

–Switched: Again came and went in a flash! This cabaret was filled with humor, heart, and great new friendships. Audio clips of the show including Courtney’s solo “King of the World” from Songs for a New World will be available soon.

-Courtney has been cast as the Witch in UC Irvine’s upcoming production of Into the Woods. Opening night is set for November 12, 2010. Check back soon for more information!

– Courtney has been admitted into UC Irvine’s compeitive BFA Musical Theatre program! More information on the Class of 2011’s BFA Showcase will be available in January of 2011.